The last couple of years it became increasingly clear to me that the time had arrived to start my own band with which I could play and record my own heartfelt music without any concessions. I had been enjoying myself by forming ad hoc quartets in an attempt to honor my love for Jazz greats like Coltrane, Cannonball, Monk and the likes. But never saw the purpose of recording such endeavors other than to serve the nostalgia of jazz lovers, which isn’t an dishonorable cause at all btw. My dream has always been to find the core of my musical identity which would also incorporate my love for classical composers like Faure, Scriabin, of course Bach but also the pearls Pop music produced and transform all this beauty into an improvising and grooving celebration of pure music in a Jazz context.

Things got moving when I met drummer Roy Dackus almost as a divine appointment. Roy immediately became involved in the project as the earthy drummer I needed and offered his fantastic studio to start experimenting. Although I had been working with fine pianists in my previous projects I always felt like playing the peaces I composed myself which I eventually did. It turned out to be a good move because it allowed me to show the direction of a song in a much more convincing way than by just playing the saxophone.  Roy and I recorded all seven pieces first with drums and Wurlitzer before my favorite bass player -who happens to be my brother- Clemens van der Feen provided the bass tracks which he recorded in his own studio. In the mean time I was preparing my beloved Blutner grand piano for recording in my brand new home studio where I also experimented with chopping celestial piano chords to provide natural pads on most tracks. Also the bell sounds of track 3 and 8 were generated by the Blutner.

After playing several tryout gigs with the trio (me switching back and forth from piano to sax) we realized we needed a strong quitar player to add depth to the compositions in soloing and at the same time providing space for me to stand up and play the saxophone. When guitar legend Anton Goudsmit joint the band, Odyssee was born. It felt like being accompanied by three kindred musical spirits and setting sail to discover new ways of Jazz in an attempt to play music just for music’s sake. Anton had a great contribution to the cd by playing on three tracks and is in-expendable in our live performances.

But another mysterious rendezvous was needed to complete the album. I met Marieke Pieters, who is an multi artistic person with incredible musical ears, and we hit it of from the outset. She was very enthusiastic about the Odyssee music and offered to make a sculpture to be used as the cd cover, which is pretty amazing. 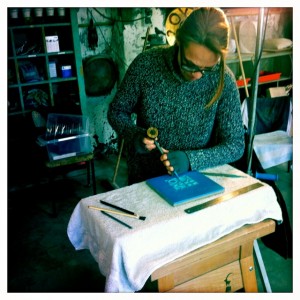 Marieke introduced me to her friend Francesca Patella who not only did the artwork but also pulled it of to make a good photo of me..